Ambassador Leonard is a career member of the Senior Foreign Service, class of Minister-Counselor. From 2016-2019, Ambassador Leonard was the Representative of the United States of America to the African Union, with the rank and status of Ambassador Extraordinary and Plenipotentiary, serving concurrently as U.S. Permanent Representative to the UN Economic Commission for Africa (UNECA). She was previously the U.S. Ambassador to the Republic of Mali from 2011-2014. Her service in Mali was recognized with the Department’s Diplomacy for Human Rights Award in 2013, an honor that annually recognizes a U.S. Chief of Mission who has demonstrated extraordinary commitment to defending human rights and advancing democratic principles in his or her host country.

She served as the State Department’s Senior Faculty Advisor at the U.S. Naval War College in Newport, Rhode Island, following a year as the Department’s Diplomat in Residence for New England, based at Tufts University. Ambassador Leonard was the Director for West African Affairs at the U.S. Department of State from 2009-2011, and Deputy Chief of Mission in Bamako, Mali from 2006-2009.

After joining the State Department in 1988, Ambassador Leonard served overseas as an economic and consular officer in Yaoundé, Cameroon; Windhoek, Namibia; and Lomé, Togo. She also worked in the Department’s Operations Center and in its Office of Central African Affairs. She served as political and economic officer in Cape Town, South Africa and thereafter as Deputy Chief of Mission in Paramaribo, Suriname. 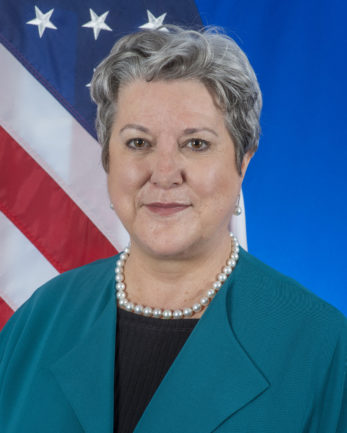